It was this time last November when I received an unexpected mid-afternoon, mid-week call from my older son, Christopher. We’d talked a few days before so seeing his photo on my cell phone was an immediate pleasure. His standard greeting, “Hi, Mom, how’s it going,” was brief before asking, “Do you think Nana can travel to State College next summer?”

My mother, his grandmother, was 90 years old at the time. She and my sister had visited Doug and me in Austin just two weeks earlier. She always wanted to see the places we lived, immediately buying a map of each city from AAA, then carefully mapping our specific location. It was probably her last longer trip as she tired easily, was using a wheelchair between terminals, and worried about schedules. I knew she’d want to attend as Christopher is one of her favorites (maybe because she spent two weeks with me after he was born as I began my role as a single, first-time mother; or because he went to Dartmouth and she went to Mt. Holyoke College, the New England connection; or because my son and my father share many similarities). The trip, though,from Walla Walla to Pennsylvania would entail at least three plane changes. It would be too much for her.

As I expressed my thoughts to Christopher, I wondered why he was asking this question so far in advance of the summer. And then it dawned on me. I almost jumped out of my chair, “Are you and Kate getting married?” He was hesitant, only beginning to formulate the idea in his mind. He had not yet discussed it with Kate. What followed was one of the most wonderful, deep, and thoughtful exchanges of ideas I’ve had with my son. What a gift, to be part of his thought processes, his developing ideas, his viewing the various sides and angles to the idea of marriage, perhaps children, a life-time mate, from an existential, then legal and finally emotional perspective.

A few weeks later Christopher and Kate shared the official news that they were going to be married. They weren’t certain of that date, yet, though sometime in June or July of 2014, depending on when Chirstopher might be able to convince one of his former Dartmouth professors, who is also a minister, to officiate at their ceremony. Eventually, the date was set for June 12, 2014, to be a Quaker-style wedding.

My son and daughter-in-law were so inclusive in the planning, the preparation, and the last-minute details of their wedding and reception. Just as they are in so much of what they do. Glory made flower arrangements from the wildflowers and dahlias that Christopher and I picked. Alex baked Sicilian chocolate tartes with Kate for the wedding cakes. Doug kept buying more wine, extension cords, all the miscellaneous last minute stuff. Alex, Lou and Matt mixed the music playlist. Matt and Charlie made beer and slow-cooked lamb. Kate’s parents, Lou and Linda, were significantly involved with all the details of an outdoor wedding and reception. The affair was truly a community of love, of friendship and of family.

After the wedding ceremony at Millcreek Marsh and the appetizers on the lawn at Furnace Mansion, Christopher took the microphone and stood beneath the dinner tent. He proceeded to present an homage to us, his and Kate’s closest friends and immediate family, singling out each of us, as the lamb was “resting” before he sliced it for the buffet dinner. I beamed as he shared part of our conversation from that November afternoon with the wedding guests:

“I might say publicly here that it was with my mother, last fall, that I first broached—to anybody—the thought of marrying Kate, in some respect even before I made sense of the thought myself. That I was most comfortable talking to her, and not to my dude-friends, about the existential anxiety the decision seemed to call for surprised me a bit; but only until I remembered the many other times when she gave me the greatest comfort.”

I am so fortunate to have  such loving, kind, strong, gracious and grateful sons.

[Furnace Mansion, State College, PA: Christopher and Kate’s wedding reception, June 7, 2014. Charlie and Amy are at the table behind me.] 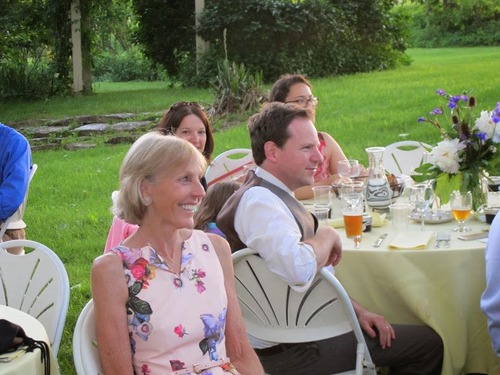