“The River,” a play (opened in London two years ago in 90 seat theatre) by Lez Butterworth (see last week’s “The New Yorker” for extensive interview) was intimate with Hugh Jackman as “The Man” and two women playing “The Woman” and “The Other Woman.” The setting was simple, an isolated fishing cabin in north England near a river famous for its once a year run of sea trout. The Man imagines the perfect woman, characters that come in and out of his life through the present and past…and eventually the future. He cannot find the “one love,” unless it might be his fishing. Intelligent and slightly humorous dialogue, the play intrigued with its bit of fantasy interposed with realism.

The star of the trio was “The Elephant Man,” a revival (but new) with Bradley Cooper as Joseph (John) Merrick and Patricia Clarkson as Mrs. Kendell and Allessandro Nivola as Dr. Frederick Treves. Cooper’s physical transformation without the use of make-up or prosthetics to show the deformities of Merrick was compelling. His portrayal of the man, from the circus freak sideshow to his blossoming at the London hospital that became his home for four years under the care of a forward-thinking Dr. Treves, was moving in its humanity. Clarkson, as the artist who befriends him, unafraid of the man’s physical ugliness, brought sensitivity and longing to this oft-told tale. The juxtaposition of religion (priest) and science (doctor) in these characters, with Merrick their foil as well as mirror to their own imperfections, raises questions of man’s essence. Cooper proves himself a dramatic actor with this long-coveted role. [Booth Theatre, NYC] 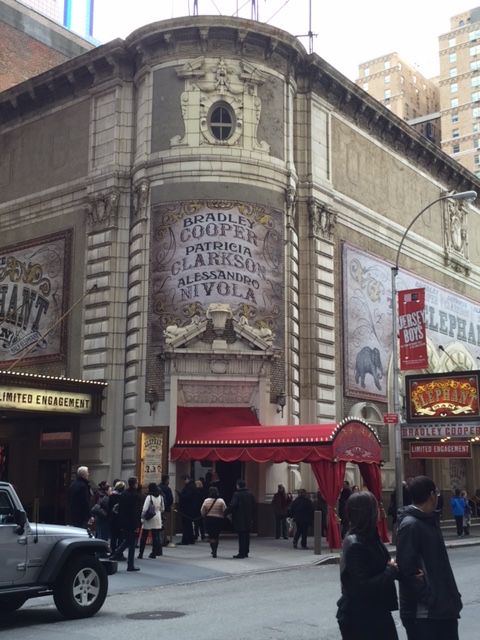